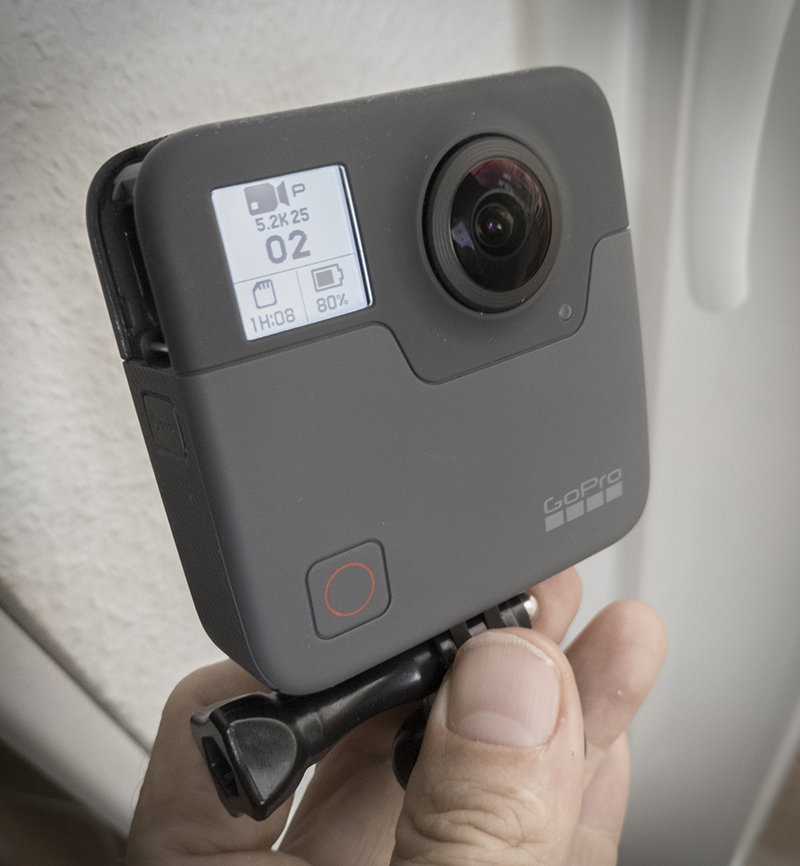 So the Fusion arrived and I did some basic tests.
Listen, GoPro: take one of your new cameras, put two micro-sd-cards into it and watch the display:

Protune … by the way: there is NO possibility to set the white balance manually … hm … So it’s an automatic all the time ? Gopro, pease add the feature to set the light colour in Kelvin. Should be no problem, right?

The battery will last round about 70min. I did a concert with it – 47min – no problems, no overheating. It’s possible to power the camera battryless via USB-C. – Probably the best solution for long stationary sessions because the battery will not suffer from the  heat. – I will check that soon.

At this moment the GoPro-app for Android does not support the Fusion. On an Ipad there was an update which should recognize the Fusion … – the camera appeared in the listing, but the connection failed. Maybe you need OS11, but this does not work with my Ipad 4 …

So for me the one and only solution me was the Gopro Fusion Software (Win10) – and this does work. The PC recognized the Fusion – you will get two seperate drives – but I was not able to copy the data directly by drag-’n-drop. Via the Fusion software you can choose the files and convert („render“)  them to a directory of your choice in two different flavours (5,2k): cineform or prores422.

One minute original material needs ca. 2 x 325MB of space onto the cards – the rendering to cineform (default) generates a final file of ca. 3,22GB. The same file as Prores422: 4,9GB.

The camera has to get connected due the rendering, otherwise the software stops the rendering (?). Maybe this could be fixed, GoPro.

My first real-world-test – a performance a few days ago with a length of 47min:
First rendering – to cineform-codec – did cause a system-crash. CPU was at 100% all the time – OK – but memory also … 100% usage of 64GB and the Gopro-software was just listed with 13GB. Maybe a memory-leak … – ended with blue screen …

Second attempt did work. Remember: the final file will get very large. The software first merges the 3GB-parts of each camera to one single file and the resulting two files (front and back) will stitched together.

Fortunately the software allows to set in- and  out-point, so you do not have to render whole shots and you are able to take small parts or cut off the beginning (in my case  I had to start the camera before the beginning of the performance). This could save precious disk-space.

The result is really good – well stitched – and the plug-ins for reframing in Premiere Pro/After Effects do work well, also with the notebook. Rendering to HD is fast.

The Fusion is a revolutionary camera which will have a noticable impact in the media-business as the original GoPro did years before. Now there is need for working apps to have more control on location.